ENGLISH: The Pinelands Regional women’s volleyball team and their fans celebrate the Wildcats’ loss to Barnegat, 2-1, on September 16. (Photos by David Biggy)

In the first week of the season, the Pinelands Regional women’s volleyball team had to come back to beat Red Bank Catholic, then rebounded in two games against Donovan Catholic. Last week, the Wildcats won three straight wins.

â€œAt the start of the season we were playing a little more individually,â€ said junior setter Molly Quigley-Sanborn, who allowed 13 assists in a balanced offensive offense as the Wildcats beat Barnegat 2-1 on 16. September. â€œTo play well, you have to work together, and today we really played as a team. All the pieces are starting to come together now.

It took Pinelands a game to figure out what to do against the Bengals’ offense, which brought him to the Wildcats early on, building an 8-4 lead before hitting the gas and moving up. 21-12 before capitalizing on Pinelands’ mistakes to win, 25-16. But eventually, the Wildcats grabbed the momentum and used it to catapult themselves to a wild and thrilling victory.

â€œWe already knew what Barnegat was up to because most of their squad are back since we faced them in the State section last year,â€ said Quigley-Sanborn. â€œTheir passer, Patria (Moreno), is amazing, and they have a strong attack. They don’t look back for anyone either. We had to fight them for every point.

In Game 2, tied at 8-8, Pinelands senior libero Caitlyn Downes, who amassed 19 digs, came in to serve and set the tone for the Wildcats’ soaring as they scored five. consecutive points, including two of Downes’ four aces. . Pinelands built a 17-11 margin before the Bengals closed the gap to two points, 19-18. 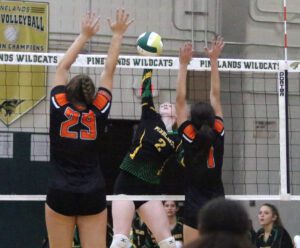 TIGHT SPACE: Pinelands’ Olivia Benson tries to land a hit through a pair of Barnegat blockers in Game 2 of the Wildcats 2-1 win over the Bengals.

The Wildcats (4-1) scored four of the next six points to take a 23-20 lead, and a victory by Olivia Benson – she had eight wins and 12 digs for the game – saw Pinelands close the match. But Barnegat didn’t give in, coming closer to a point, 24-23, before an out of bounds serve tied the game in one game apiece.

In Game 3, the Bengals (5-2) and Wildcats were stuck at 5-5 before Pinelands pushed on with four straight points on Cattleya Sturies’ serve. An ace from Sturies – she finished with three for the game – was the catalyst for another three points as the Wildcats took control, 12-6. But Barnegat fought back, using a kill from Robbieann Erskine and a dump from Moreno in the middle to reduce the deficit to two, 16-14.

From there, the teams simply traded points in spurts. Jayne Wilkinson, who finished with seven kills and two blocks, smashed an attack into the back corner, and Samanta Poling delivered an ace – Pinelands’ 11th for the contest – to make it a 20-14 game. Barnegat rebounded again to close the gap to three points, 23-20, but two more offensive errors allowed Pinelands to close it. 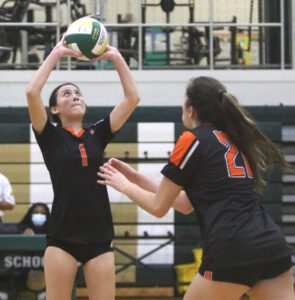 â€œMost of us play for the same club team so it’s always exciting to play at Pinelands,â€ said Moreno. â€œWe have a very great friendly rivalry with them, and we love to face them. We faced them in Moorestown last weekend and their heads weren’t there, so we beat them pretty well. This match was very different. They played better and we made a lot of mistakes, especially in the second set.

Meanwhile, the Bengals rebounded from their loss to Pinelands with a huge 27-25, 27-25 victory over Donovan Catholic. Moreno was the catalyst with 15 assists, eight digs and an ace, while Ashley Berger had five assists, four digs and one ace, and Gianna Gerckens contributed four assists, two blocks and a pair of aces. . Nina Soberano had eight digs and Tara Charland scored on three aces.

After scoring a big 27-25, 23-25, 25-12 victory over Hunterdon Central on September 15, the Southern Regional girls had a tough rest of the week, losing four in a row to quality teams.

On September 17, the Rams were swept by Toms River South. 22-25, 17-25, and in a quad game the next day they lost to St. John Vianney, North Hunterdon and Williamstown. Against the Indians on Friday, Brianna Otto had 15 digs and two aces, while Hailea Krause and Samantha Hanneman each had five kills, but the Rams gathered nothing else to avoid TRS.

The next day against St. John Vianney, Southern’s offense barely scored in an 18-25, 14-25 loss, totaling 10 kills for the contest and registering no aces. The Rams (3-5) won their first game against North Hunterdon, 25-21, but fell in the next two games, 18-25, 17-25, despite 19 assists from Molly Regulski and eight assists each from Krause and Jordyn Hamlin, who also recorded 14 digs. Otto had 17 digs and Anna Malandro had 11 more digs, while Corinne Hughes scored three kills and five blocks.

Against Williamstown, Southern got off to a good start again, winning Game 1, 28-26. However, Williamstown rebounded and went through the next two games, 25-13, 25-16. Krause had nine assists and seven digs, while Regulski allowed 18 assists and Hamlin contributed six assists and 11 digs.